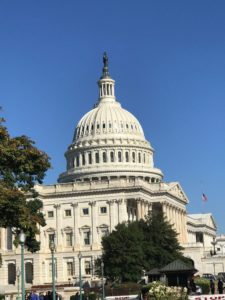 It is that time of year when we begin to wonder if a State Budget will be in place on or before the date that it is supposed to be finalized by.  That final date is this Thursday, May 31 and by the looks and sounds of things, we may enter into the fiscal year with a budget (or maybe not).

The Chamber legislative committee hosted the annual Springfield Drive-Down back on May 9 and we walked away with some encouraging news, at least more than in previous years.  Our main discussions focused on the State Budget and Transportation.  We met with Governor Rauner, Senate President Cullerton, Senate Minority Leader Brady, House Minority Leader Durkin, Senator Bertino-Tarrant, Senator McGuire, Senator Rezin, Representative Manley, Representative Walsh Jr., Representative Batinick, and Representative McDermed.  In addition, we received an update from Illinois Chamber of Commerce President/CEO Todd Maisch and were able to meet and hear from both Attorney General Candidates (Sen. Kwame Raoul and Erika Harold).

We held very productive meetings on numerous topics and as stated before, heard some encouraging news concerning ongoing discussions on the budget.  Both sides have been in discussions on revenue estimates and when the deadline hits, we may see a last minute budget deal struck as things have been a little quiet which hopefully means things are moving forward.

As far as transportation and infrastructure the news was both positive and negative. The negative side comes from the lack of funding to deal with our ever increasing regional needs. Every lawmaker that we spoke to acknowledges (that’s the positive – all agree the region needs help) that our area is in dire need of upgrades and expansion.  However, all also agree that there just is not any funding in current forms to take care of these needs. Governor Rauner has asked us to keep him informed on regional ideas that can aid in the process of taking care of these needs.

We spoke about a legal way out of the pension unfunded liabilities, a continuing need for an increase in education funding without pension shift to local districts, the threat of a progressive income tax on one of the few positive incentives to do business in Illinois, a reduction in the Dept. of Revenue 2% administration fee to local municipalities, and incentives for boosting the economy and local workforce. We continue to advocate for changes in workers’ compensation in the areas of causation, traveling employees, minimum wage replacement, and maximum awards. Finally, we discussed the issue of recreational marijuana and how businesses need to absolutely have a seat at the discussion table if and when legalization becomes a reality.  There are strong concerns for workplace policies and testing in the event this goes through.

Here is a list of legislation that we are tracking and a number of these items were able to be discussed during our meetings:

First up, HB 4163 (Wage History) passed out of the Senate Labor Committee last week and is now on third reading.  This bill would prohibit employers from inquiring about salary and wage history by adding new standards that limit employer defenses and adding new compensatory and punitive damage penalties on businesses who are not compliant.  The Chamber opposes this bill and would prefer the alternative method outline in SB 3100.  SB 3100 only prohibits the inquiry about or using of a job applicant’s wage, salary, and benefits history. It does not diminish employer defenses or enhance and expand legal remedies and fines as HB 4163 does.

Illinois manufacturers employ 570,000 workers and contribute the single largest share of the Gross State Product. However, Illinois lags behind other states in terms of growth. One tax proposal (SB 3453) offers comprehensive reform that will reinstate the Manufacturers Purchase Credit, modernize and make permanent the Research & Development Credit, and reinstate the Training Expense Credit. A second bill (SB 3303) would create the Manufacturing Destination Tax Credit creating a 25 percent tax credit on labor, apprentice, and job training costs for employers that provide good, middle-class jobs with benefits.

SB 2332 passed out of the House Health & Healthcare Disparities Committee on a party line vote.  This bill would raise the age to purchase tobacco products to 21. The Chamber opposes this legislation as it punishes businesses for the decisions of individuals.

SB 3005 has been sent back to Assignments. This could see an amendment before the end of session.  The bill, in regards to Illinois permitting processes, would further increase the cost of doing business in Illinois, hampering the growth and development of businesses throughout Illinois and new businesses looking to locate in Illinois.

SB 2577 mirrors the South Dakota law before the U.S. Supreme Court in the Wayfair case. Provides, beginning January 1, 2019, that an out-of-state retailer is required to charge and collect Illinois Use Tax on sales to Illinois customers if the company makes either 200 sales into Illinois or has gross receipts from Illinois sales of at least $100,000 in a year. If the U.S. Supreme Court rules in favor of SD and abolishes the current physical presence requirement from the 1992 Quill case this law will be enforceable. If the court upholds the physical presence requirement it will not be enforceable. The bill has passed the Senate and is in rules committee in the House.

SB 1502, otherwise known as the “Right to Know” bill, the bill as currently drafted would require websites and online services to post a privacy policy identifying the categories of personal information they collect and respond to consumer requests for all categories of personal information that was disclosed. This bill applies to any information that “identifies, relates to, or describes” an individual. It includes things like a person’s name, address, or photograph, but also “deidentified” or anonymous information such as “alias, nickname, and user name,” or IP addresses. The bill sits in the House

HB 5253 requires regulatory agencies to examine, and report on the impact new rules will have on small businesses. This should remove unnecessary barriers to small business success. This bill now awaits the Governor’s signature after passing both the House and Senate with bipartisan support.

SB 2436 is a bill to help small businesses by amending the antiquated Liquor Control Act of 1934. By updating this outdated statute, which prohibits the sale of alcohol within 100 feet of a religious institution, school, hospital or military station, local communities would now be empowered by shifting the oversight of liquor licensing exemptions to local officials rather than the General Assembly. Following unanimous passage in the Senate, SB 2436 now awaits a floor vote in the House.

HB 5046 Creates the Fair Scheduling Act that would require employers to provide work schedules to employees at least 72 hours before the start of the first shift of the work schedule. It provides for reporting pay when an employee’s work shift is canceled or reduced within 72 of the beginning of the shift. It also prohibits retaliation by employers when employees seek to enforce rights under the Act. Authorizes private actions for damages and provides for monetary penalties.

Former Senator and Chamber Board Chair, A.J. Wilhelmi spoke to Chamber members on May 23 as he is now the President/CEO of the Illinois Health & Hospital Association.  Mr. Wilhelmi drove home the point that taxing local hospitals hurts the communities they serve and diverts dollars that could be used to care for patients, to upgrade equipment, modernize facilities, and hire needed staff.  43% of Hospitals in Illinois are operating with slim or negative margins. Hospitals and medical offices are also strong economic drivers in their communities, generating billions annually for their local and state economies as well as employing more than a quarter of a million people.

On May 14 the U.S. Supreme Court ruled that the banning of Sports Betting is illegal and opens up the possibility for states to take up legislation to make a reality outside of Nevada. While in Springfield, we urged lawmakers to be proactive with legislation waiting for such a ruling rather than being reactive and falling behind our neighboring states. SB 7 recently failed to move forward on adding additional casino licenses which the Chamber opposes as over 20,000 video gaming terminals have been added in the last few years which equates to over 15 new casinos.

President Trump on May 24 signed a bipartisan bill to loosen key portions of the Dodd-Frank Act of 2010, cementing the first major changes to President Obama’s landmark banking law. While the bill will release dozens of banks from stronger Federal Reserve oversight, it falls well short of the president’s vow to repeal and replace Dodd-Frank. The final compromise leaves most of Dodd-Frank in place. The measure releases community and regional banks from tighter regulation by raising the threshold for closer Fed oversight from $50 billion to $250 billion in assets. Banks below the new threshold will no longer be automatically subject to annual Fed stress tests and capital buffers meant to protect large firms from severe financial crises. Those banks are also no longer required to from submit for Fed approval a “living will” that outlines how a bank’s assets could be liquidated upon the firm’s failure without causing a widespread meltdown. The bill includes several provisions to scrap rules for community banks and credit unions. Firms that hold 500 or fewer mortgages a year will no longer have to report some home loan data to federal regulators under anti-discrimination laws. Trump said the rollbacks would help community banks and credit unions become “vibrant and strong,” insisting years of overregulation had suffocated small firms.

Finally, Congress could be ready to bring up Immigration over the summer before the mid-term elections. Also, tariffs on steel and aluminum have been in play and we look for your feedback on how these issues would affect your business.